I finally have some real progress to share on the Ravenclaw gown! Things have been going slower than I had planned, but we are moving forwards (though things will slow down even more with Jane Austen Festival this weekend)!

The gown is actually three parts: underskirt, overskirt, and bodice, and I have now finished the underskirt.

You can read more about the dress design here.

The upper part of the skirt is very plain, since it will be almost completely covered by the overskirt, while the hem is heavily embellished.

I used the Truly Victorian 1870s Underskirt pattern (TV 201). The skirt is a great basic shape, and fits perfectly on top of Truly Victorian’s early bustles and petticoats.

The construction is quite basic: one front panel, one back panel, two each side back and side front panels, and a waistband (and a pocket, which is very exciting!). I flat-lined the entire thing with cotton organdy to help it hold its shape and volume.

Instead of shortening the skirt when I cut the pieces originally, I added a bit of functional decoration with three tucks around knee level. 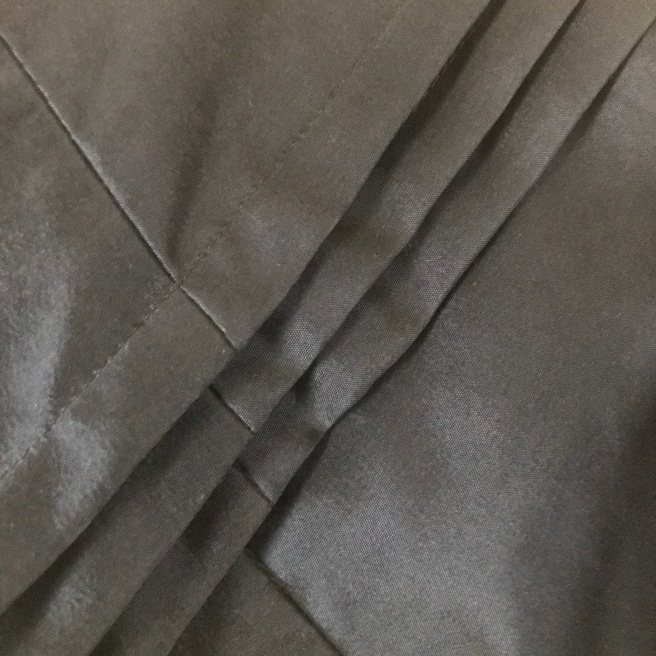 The waistband is the last bit before the fun of embellishing begins! 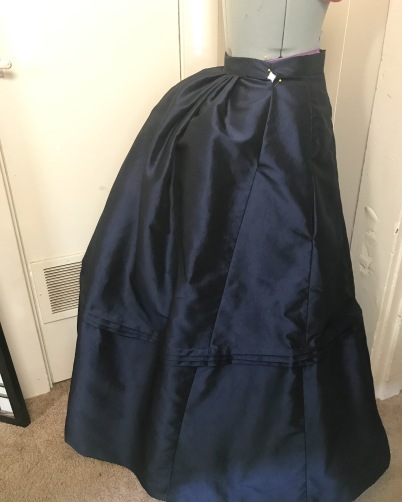 The first component of the hem embellishment is a deep, knife-pleated ruffle in bronze-colored taffeta. 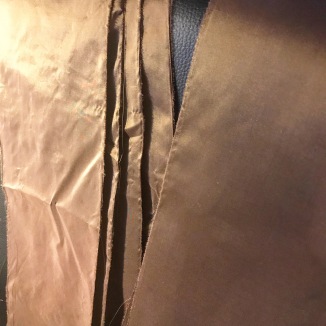 Instead of a hem, the ruffle is bound at the bottom with bias strips of the blue taffeta. 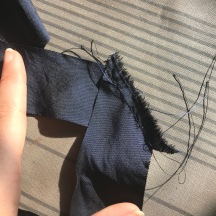 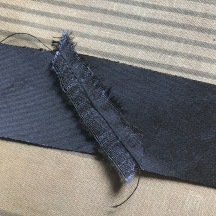 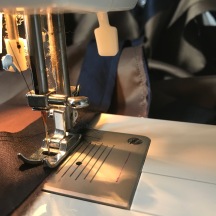 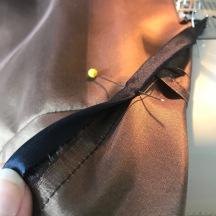 If you and the people around you are interested in sewing, you may have seen a video a few months back of someone very cleverly using a fork to form pleats by sliding one tine under the fabric, twisting the fork so that the fabric wrapped around all the tines, removing the fork, and sewing over the newly-formed pleat. I got to go one better. When my husband saw me heading to my sewing machine with a piece of cutlery, he understandably asked what on earth I was doing. Once I explained the technique, he promptly took the fork away and headed out to the garage, where he fabricated these nifty little devices so that I can now make even pleats in multiple sizes without the need to waste time on measuring or pinning! They made pleating a breeze! 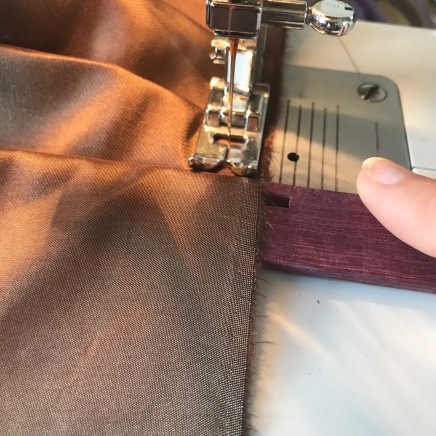 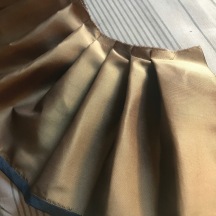 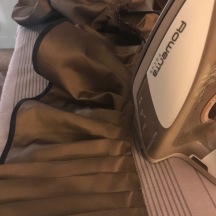 Brandon also helped me pin the pleated ruffle in place, so that we could make sure it hung at exactly the right point when the skirt was being worn.

Next came the velveteen appliqué shapes that go above the ruffle. I made a quick template out of paper, and cut out 18 shapes to fit around the entire skirt. 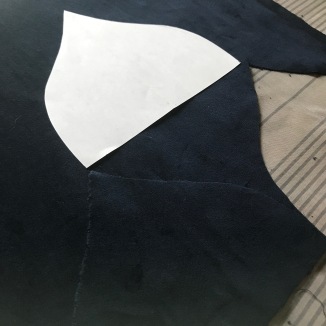 Placing and stitching the shapes: 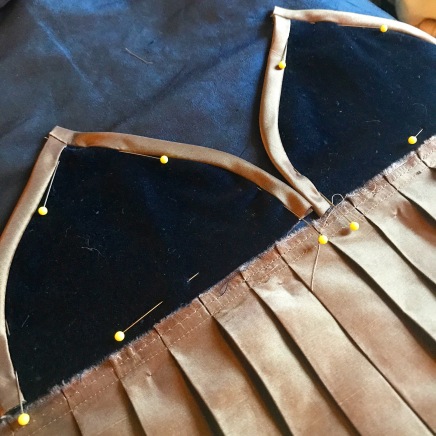 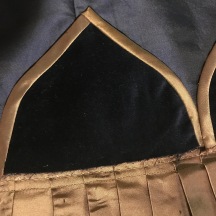 I watched a lot of Bleak House while working on these appliqués!

You can see in the pictures above that the raw edges of both the ruffle and the appliqués are showing in the center, so I needed something to cover them up. I used a bias band of the blue taffeta with a row of brown piping along the top edge, where it will contrast with the blue velveteen. 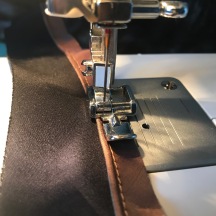 If you’re interested, you can read more about making your own piping in my blog about making Luna Lovegood’s iconic pink coat, here.

I was able to machine stitch one side of this band to the skirt by sewing right in between the blue fabric and the brown piping so that the stitches disappeared into the seam between the two colors.

The other side had to be hand finished (more Bleak House!). 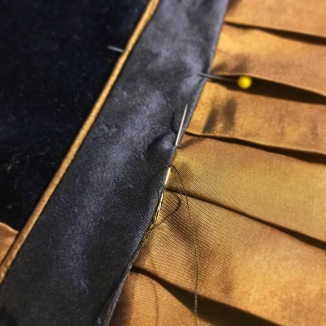 Voilà! I’m very excited about how the embellishments turned out! They really look like my sketch, which is so satisfying! But in full color, it’s even better! 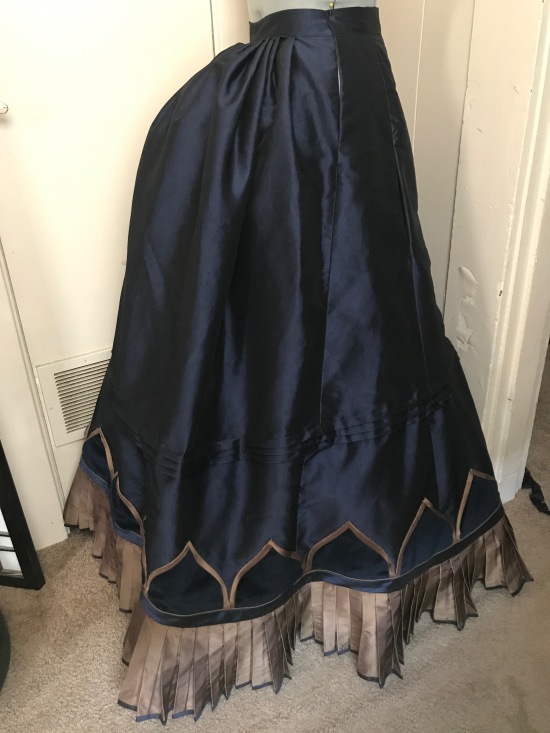 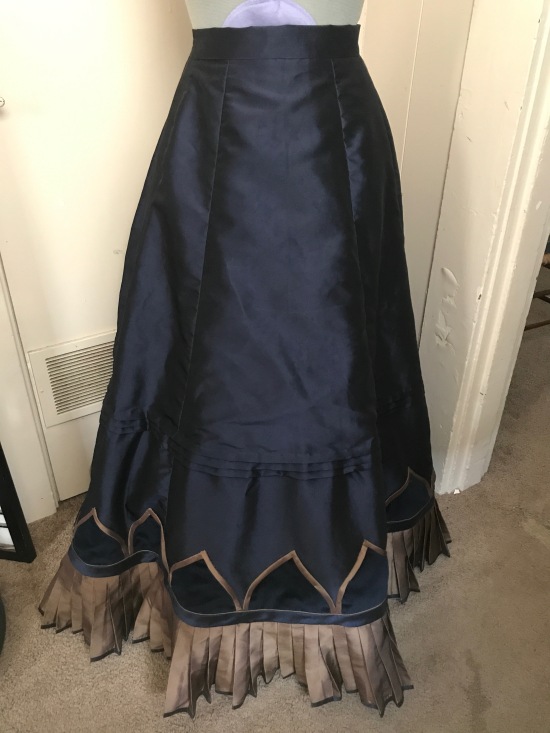 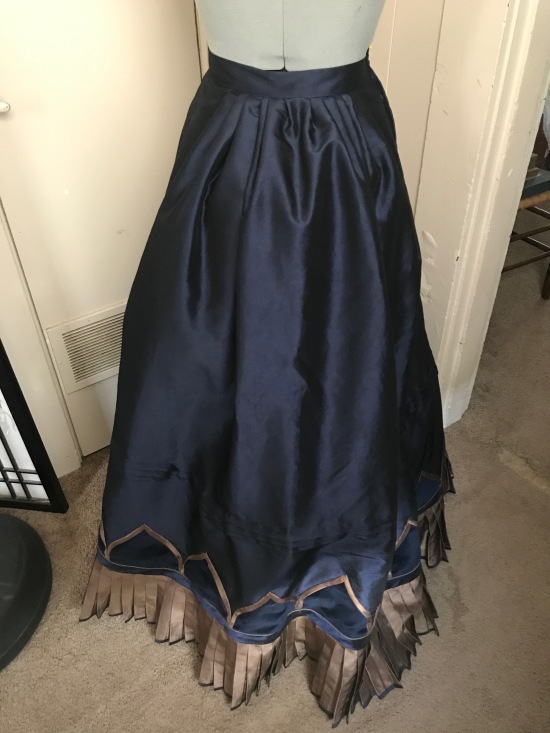 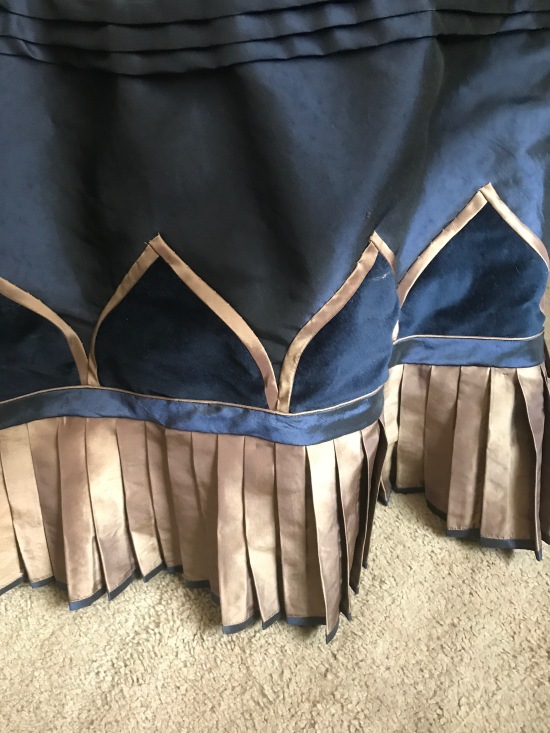 The next step on this project will be the overskirt, and I’m salivating to see how it turns out, but it’s going to have to wait.

The North American Discworld Convention is happening at the top of September, and Brandon and I need costumes in which to celebrate both our first anniversary, and our favorite fictional universe. I’ll be taking a break from the Ravenclaw gown in order to work on our Adora Belle Dearheart and Moist Von Lipwig costumes, which will be inspired both by the book descriptions and by the fashions of the early 1890s. Can’t wait to show you progress on those! I both dread only having only 6 weeks to work on them (though both of us will be sewing), and think September can’t come soon enough!  (If you don’t know Discworld, go find some now! Your life can only be improved by Terry Pratchett’s hilarious satirical look at life, the universe, and everything.)

Hannah is a reader, a writer, a costumer, a wig-maker, a historical interpreter, a cosplayer, a tea-drinker, and a lover of yellow. View all posts by stopphannah