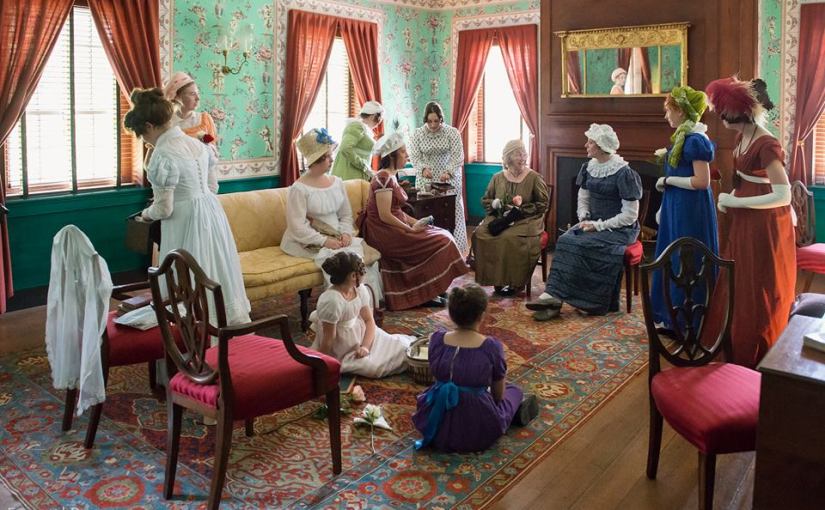 This is a recap of the event at Locust Grove. To read about the construction of my 1822 dress, you can start here.

I know I’m a little late in showing off how the 1822 wedding turned out, but I hope you’ll forgive me when you hear about all the excitement!

For Brandon and I the day started at 10, when we got to Locust Grove and started piling on the layers. Things were right down to the wire, and this was the first time Brandon had put on the finished jacket. Just for kicks, the event landed on a 97 degree day with a 106 degree heat index, so you can imagine how snug he was in thick, dark-colored wool. So glad that an amazing team of other CIs took on the task of creating a jacket from the 1821 regulations (a tricky period since it was a uniform that lasted only a few years, and there is very little documentation about it besides the regs themselves). So many blind-stitched buttonholes.

Luckily I had help putting on shift, stays, petticoat, chemisette, dress and wig. I left the veil off until just before the ceremony–something needed to be a surprise!

The wedding party gathered on the porch at 11 for a final rehearsal (our officiant had to step in at the last moment!). When that was over, Brandon got me to take a quick stroll through the garden before our busy day started. No matter how much stuff I wanted to do, or how many friends I wanted to chat with, he insisted, and by the grape arbor (where we took pictures together our very first time at Locust Grove), he told me he thought it would be weird for us to get fake married before we were really engaged. He dropped to a knee for only a moment (couldn’t risk those breeches getting dirty in the wet grass), but it was enough!

So, newly engaged, we scampered off to find our friends. We just about scared poor Brian (the program coordinator) to death when we told him to come with us to find everybody else. I don’t know what disasters were going through his mind in that moment, but we apologize for giving him a mini heart attack. Luckily, our fearless CI leader, Amy, had a couple bottles of champagne squirreled away, and we got a toast out of the way just as the event opened at noon.

The men went off to carouse and shoot the fowler.

The ladies started our day on the porch, where we could catch guests as they went into the house and talk up the wedding later in the day.

We spent the afternoon wandering the grounds, chatting, and watching readings of Jane Austen’s early works, while the other CI ladies found married guests to ask for advice on my behalf. There was much giggling and blushing and grinning, all compounded by the excitement of a real engagement! The news was all around the event the moment it started. People we’d never seen before came up to congratulate us. Brandon had to rush to intercept his mom and brother when they arrived to make sure they heard it first from him instead of a stranger!

As the ceremony drew nearer, the ladies retired to the great parlor to prepare:

This was my absolute favorite part of the day. It was a perfect moment in interpreting: alive and vibrant. We were able to really bring the excitement of the day to the guests, and interact with people who came through the house on an intimate level. The moment I put my veil on and looked in the mirror sent a little shiver down my back as well.

I couldn’t believe how fast the day flew by, and too soon it was time to leave this space and head to the main event!

If you were there, you may have recognized the ceremony from the 1995 A&E Pride and Prejudice, but with all the extra fire-and-brimstone that they left out. My favorite bit is when he has to dedicate his body to me. Oddly enough, I did not have to do the same for him.

After the ceremony, we retired to a lovely tent for cake, wine and more congratulations than we knew what to do with. Thanks to everyone who was there! The day couldn’t have been better.

We meant to get back to the grape arbor and take some pictures for posterity, but never did get around to it. Luckily, the whole day was captured beautifully by Heather Hiner of Fox and Rose Photography. You can find more fun recaps of the event on the Locust Grove blog.

Now we get to look forward to another day just as special next year!

If you want to read about the making of this dress, you can begin here. 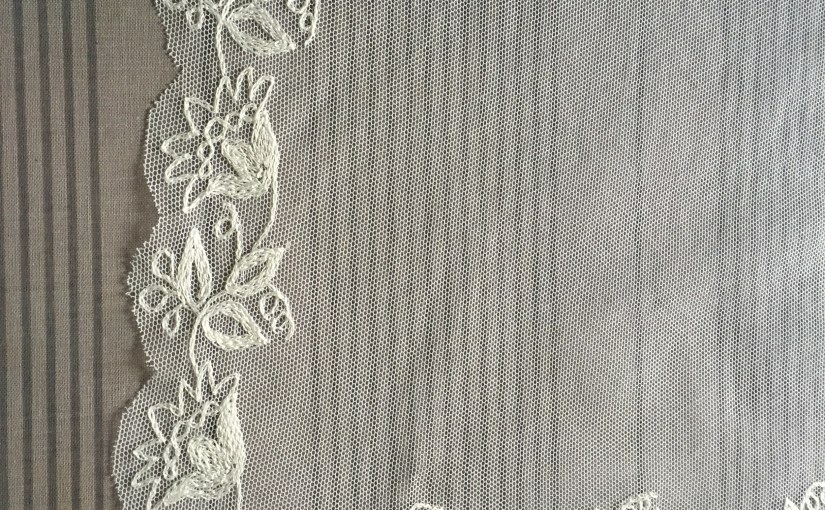 Lacemaking has always been one of those crafts that has interested me, but that I never seemed to have the time to pursue. Things like bobbin lacemaking and tatting are time consuming and complicated to learn. I decided I wanted to learn one of the methods that involves embroidering designs onto mesh, instead of arranging threads to create a strip of lace. Finally, earlier this year, I went and did some research into the myriad methods of making. There are several different methods involving embroidery, and of them all, I landed on tambour for my first attempt. Tambour turns up in England around the 1760s, when lightweight muslins from India became popular. It requires only two tools: an embroidery hoop on a stand, and a sharp hook, which is used to tie a series of chain stitches through fabric. Here are images of the hook, and a tambour shawl from the 19th c. 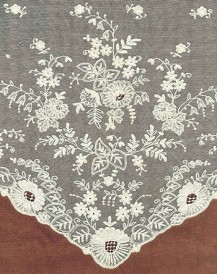 The art was incredibly popular in the Regency, and can be used not only on mesh, but on fabric for dresses, cushions, and more. Tambour is easy to learn, and once you get comfortable with it, much faster than any other kind of embroidery. I picked it because of it’s speed, popularity, and the fact that the basic motion of it, using a hook to create interconnected loops, has similarities to both wigmaking and crochet, so I hoped to pick it up quickly.

*Edit–I’ve been doing tambour, and improving my technique for several years now, and if you are interested in starting to learn yourself, you can start right here on Fabric & Fiction, with my new Tambour Lace tutorial series!*

Brandon got me the things I needed to start doing tambour for my birthday in March, but then things go so busy that I never got the chance to start, though I had several projects planned. But in the past couple of weeks, I could put it off no longer, because guess what Ann Croghan needed for her wedding? A veil! Once again, these two lovely brides from 1820 and 1823 were my inspiration.

Both brides wear a lace veil attached behind their hairstyle with a triangular headpiece that sits on the top of the head. I set out to recreate the style.

First I scoured Ackermann’s Repository issues from 1821 and early 1822 for embroidery patterns I liked. I landed on this one from November 1821:

Since I was crunched for time, I decided to do only the border, and skip the allover pattern of smaller flowers and sprigs. I also skipped doing a more traditional marking method like sewing a running stitch around the design in favor of my trusty water-soluble marker. The event is coming up fast after all! 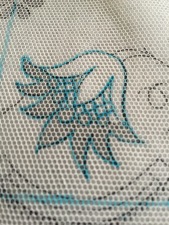 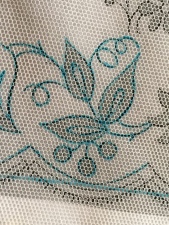 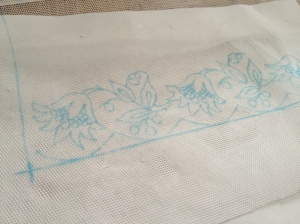 For the first few motifs, I was afraid I’d never finish in time. Panicked thoughts ran through my head. “Oh God, I had so many projects planned. This is terrible! I’ve made a dreadful mistake!” But soon enough I got the hang of things: the tension, the way you have to vary stitch size around tight curves and at corners, and eventually I was zipping along at a pace I couldn’t have imagined at the beginning.

The pattern is made up of alternating leaf and flower motifs, so I thought I’d show you how each one of these motifs went together, starting with one of the leaves: 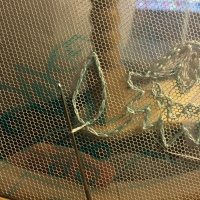 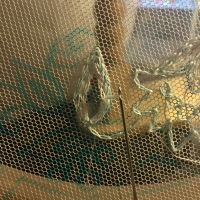 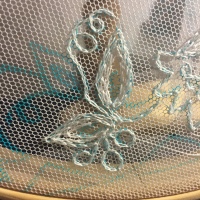 The flowers definitely turned out to be the simpler, quicker part of the pattern: 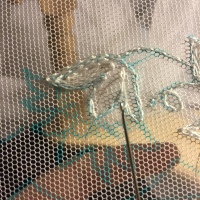 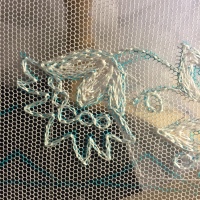 But while embroidering is fun, getting rid of all those pesky thread ends is not. Each thread starts with something called a waste knot, which you can see in the  third picture. The thread is tied to the mesh outside of the pattern, then brought through to the back so it’s in the right place for embroidering. Each of these knots had to be snipped, and both ends of the thread woven through the back of the embroidery to secure them (no knots in embroidery unless they’re part of the pattern!). I thought about counting how many thread ends there were, before deciding that that was insane. Suffice it to say, there were a lot! 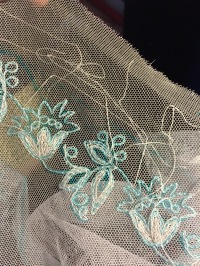 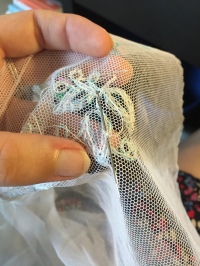 Finally, I trimmed the veil edges into  scallops following the shape of the pattern, and removed all of the blue marker. After a nice press the veil was ready to go.

Thread ends in and edges trimmed, there was nothing else between me and that silly little lacy triangle that perches on top of the bride’s head.

I used a bit of spare buckram from my last bonnet to make the triangle. Luckily I’m working on a wig for myself as well, so I could test out the size using the wig head. (More to come on that later!)

I covered the triangle in white silk batiste, which would give it a smoother finish, while remaining translucent, as the headpieces of the fashion plate brides seem to be. 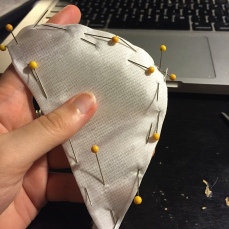 And once again, what bride doesn’t need as much froofy lace as possible, so I attached two rows of gathered lace around the edges: 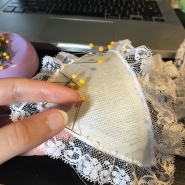 With veil and headpiece both ready, it was time to attach them. I gathered the top, un-embroidered edge of the veil, and arranged the gathers against the headpiece until I had enough space for a bun to poke through. I could have just sewn the ends together, but a few weeks ago I ordered some vintage silk orange blossoms (a very popular wedding flower) to wear in my hair, and the seller sent couple of cute little tiny roses on single wires with them. 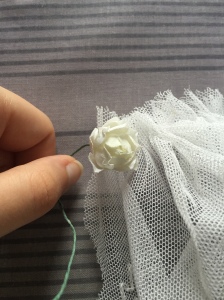 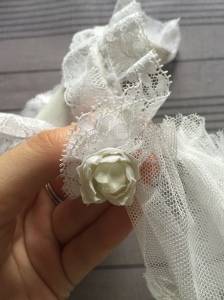 I slipped the wire through the mesh of the veil and the lace on the headpiece, and wrapped the wire around to secure it. This way, I can easily remove the veil and use it for something else, or adjust it if the bun works differently than expected.

I’m now in real crunch time trying to make sure I get my wig done in time, so back to work! Come see the whole outfit in action at Locust Grove on July 18th!