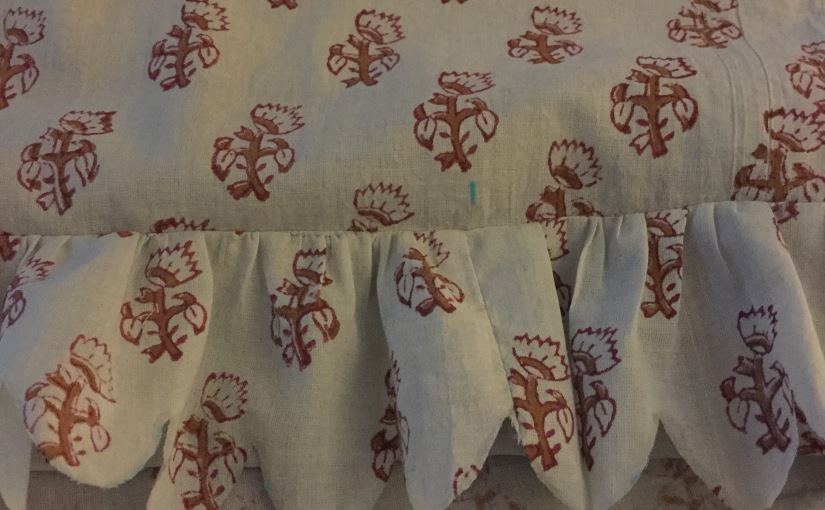 Somehow, in the two years since I made my first Regency dress, I have never made another day dress for myself. Now, I wear Regency/Federal clothing pretty often compared to your average citizen, and I have to wear my white dress and maroon spencer every single time. This seems a bit silly (not to mention smelly on a hot summer weekend) to me, so I’ve set out to remedy it.

At the Jane Austen Festival in Louisville last July, I bought a lovely lightweight grey cotton with a marigold and maroon block print at Regency Revisited. I sat on that fabric for a year as project after project passed it in the queue, though I had lots of plans for what I wanted my prospective new dress to look like.

Unfortunately, my ideas went through a lot of evolution before I actually got around to cutting the fabric, and it turned out that I didn’t have enough fabric for all of the ruffles on my planned dress. I had to go back to the drawing board, searching through fashion plates until I came across this one:

I laid out my pieces, measured very carefully, and as luck would have it, I had just enough extra fabric to make those lovely scalloped ruffles for the hem. 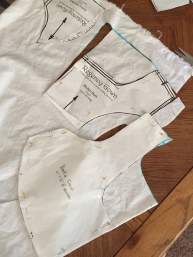 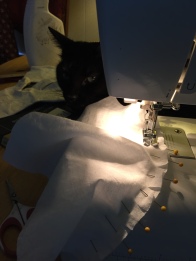 The base of the dress is just the Sensibility Regency Gown pattern, altered to fit me a little better, and with the neckline raised at the front and back, but left the same at the shoulders to form a slit-shaped neckline. This is just the mockup, so I pinned the pattern pieces to the muslin and made the alterations right on the fabric. I made several more rounds of minor alterations to get the neckline and fit just right after this one. This week, Pico decided that her new favorite sleeping spot was behind my sewing machine. She glared at me every time I ran it, but didn’t seem interested in moving.

Once again, I’ll skip most of the basic dress construction and get right to the more interesting things.

The sleeves in the fashion plate have a sort of flared not-really-a-cuff on the sleeve that covers the hand from wrist to knuckles. I made this by gathering the sleeve onto a piece of narrow bias tape so that it was the right size at the wrists. The ‘cuff’ is just a rectangle of fabric gathered into the already gathered end of the sleeve. I did all this before sewing the sleeve into a tube. 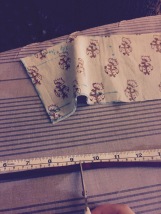 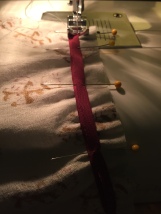 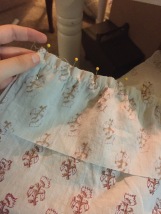 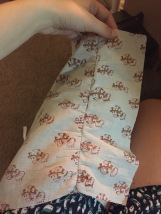 And now it’s time for the really fun part: scalloped ruffles. I turned ruminated over the best way to do these for a long time, and finally I decided that it was insanity, at least for this dress, to try to put a backing on the whole piece so that it would have a nice finished edge. If the scallops were larger, I probably would have, but these were quite small, only about an inch wide and 3/4 of an inch tall.

So I made myself a template out of part of a box of crackers and set to marking each and every scallop. When they were all marked, I cut them out with clipping scissors, veeeery carefully. For the raw edges to work out, there couldn’t be any rough patches for things to snag on. In the 19th century, ruffles were often pinked on the bottom edge, instead of hemmed (since it takes a lot of hemming to hem several layers of ruffle), but that wouldn’t work for these. Once again, if those scallops were bigger… When the scallops were cut, I starched each strip to help them keep their shape, and (since I’m a modern woman) painted the edges of each with clear nail polish. I wear these dresses a lot, and I’m not willing to put all that work in for ruffles that disintegrate as soon as you look at them. Once the scallops were cut and reinforced,  I just gathered and sewed them on like any other ruffle. 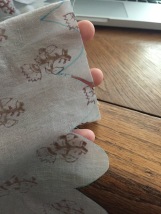 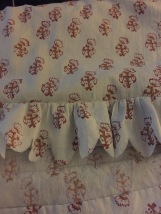 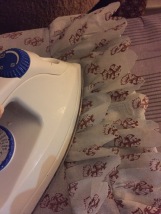 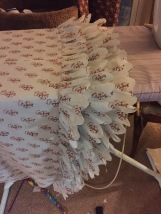 The skirt got three rows of ruffles, overlapped as close as I could estimate to the same point as the ones in the fashion plate. 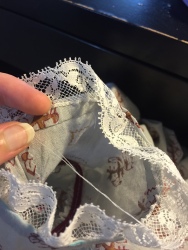 The last major step on this dress was to create the lace details at the waist, cuff and neck. The waist cuff was simple, I just gathered lace slightly and stitched it inside the cuffs. I pinned some lace to the gathered wrist, but decided I didn’t like it there. The neckline was a bit trickier. The trim consists of two rows of lace edging attached to a central band. To make the band, I cut a few bias strips from a scrap of the main fabric, sewed them together, and pressed the edges under. I pinned this around the neckline of the dress before attaching any lace, so that I was sure it would go around the curves neatly. Then I gathered more lace and pinned it just beneath the lower edge of the bias band. I stitched through the band, lace and dress (but not the lining) all along that edge to attach it, then did the same at the top. 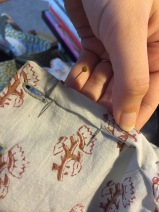 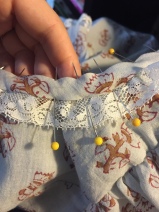 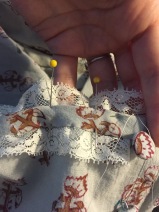 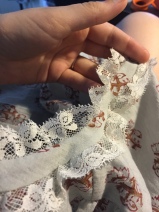 And that’s it! Here’s the finished product (note the fashion-plate-mimicking stance): 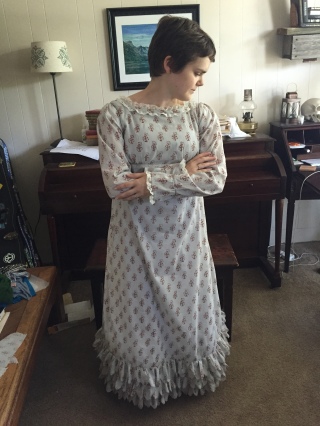 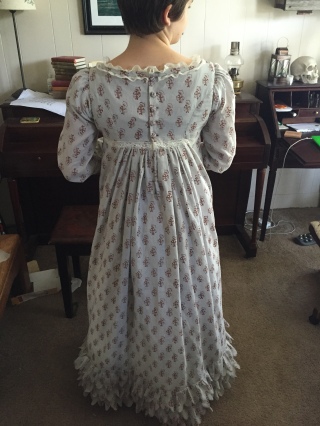 I got to wear the dress for the first time this weekend for a super-special-exciting event that I can’t actually tell you about yet–but I can’t wait! I’m so completely thrilled with how it turned out–so glad I got diverted from my original plans and made this one instead! Someday, I’ll have to get myself a fabulous straw top hat like the lady in the fashion plate has and recreate it!

Next up: back to yellow stripes for my new pelisse! 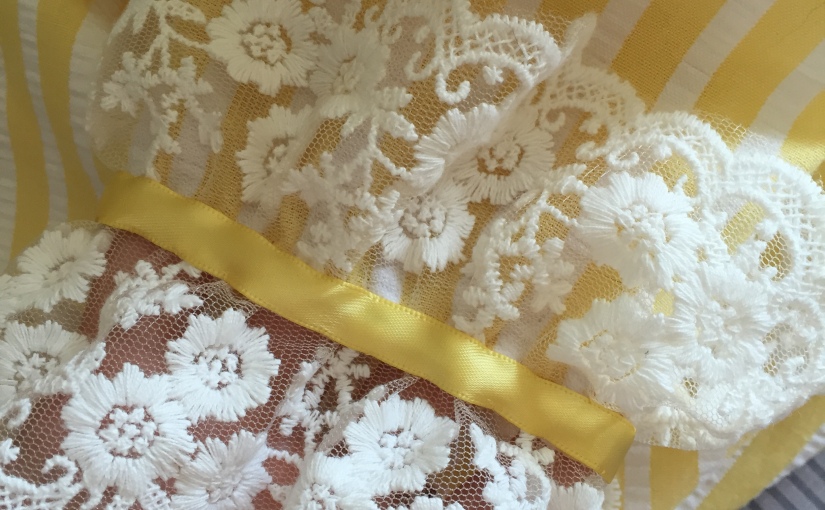 So, you might think that after finishing an insanely huge event like the 1822 wedding, I would take a break for a while, but while idle hands may not be the devil’s playthings, they do drive me mad. I can’t even watch 20 minutes of Parks and Rec without something to do with my hands. So when all of the wedding pieces were finished, I did a cross stitch piece for a friend’s birthday and jumped straight into another Regency dress. Not for me this time, that comes next, but a commission from another interpreter.

Several months ago, a friend of mine heard of a fabric store that was going out of business several towns over. That was sad of course, but it meant it was time for a road trip! I got six yards of some lovely yellow and white striped fabric for $5 a yard, plus it was meant for curtains, so it’s really wide. It turned out to be the perfect fabric for Marrie’s dress, and there will be enough to make myself a pelisse as well!

I should have taken pictures of the two rounds of mockups we did in order to get the bodice fit exactly right, but sadly, I did not. I’ll begin with the real bodice instead. 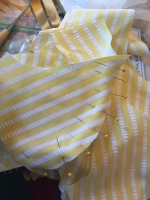 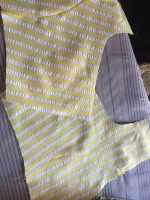 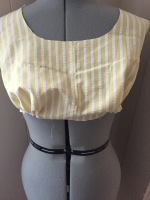 This fabric is basically an extra-large seersucker. It is lightweight enough to be just translucent, but sturdy enough that it goes through the sewing machine beautifully. The stripes were nice to work with because they’re an automatic guide to whether you’re square on the grain, and lining up buttonholes has never been easier.

From here I’m going to skip a few steps, because the basic structure of the skirt and sleeves is not particularly interesting. The fun of this dress comes from the embellishment! 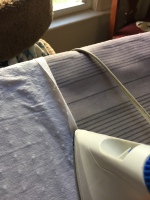 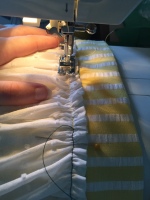 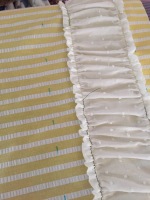 The skirt decoration is actually very similar to the poofs on my 1822 wedding gown (and made of the same material too!). I started with loops of fabric about twice as long as the circumference of the hem and creased each edge under, then ran a gathering stitch through both layers of the creased edge. The biggest difference is that instead of letting the strip poof out, it is pulled taut against the main fabric.

When the skirt was done, I took a quick break from the dress to create the fichu, which is also made of the leftover Swiss dot from my 1822 dress. It has matching ruffles around the edges which are gathered down the center and pinked on the edges instead of being finished with a hem–a very common time-saver in the period.

Time for the last details: 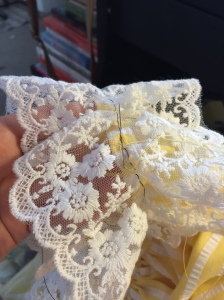 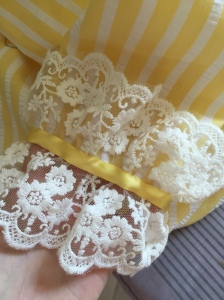 I originally bought this lace to use on the fichu, but when I pinned it on it was just too much. It was perfect, however, to create a ruffly detail on the cuffs, with more of that yellow satin ribbon as an accent down the center.

I absolutely adore this dress! I’m actually a bit jealous of Marrie, but I can’t wait to see it in action on her, either! Here are a few preliminary photos of her, and hopefully I’ll get more at an event in the future: 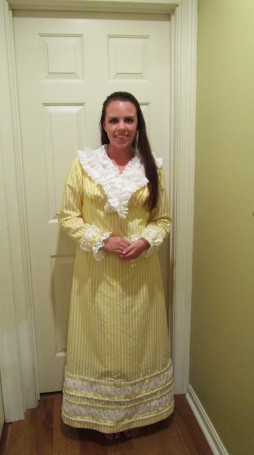 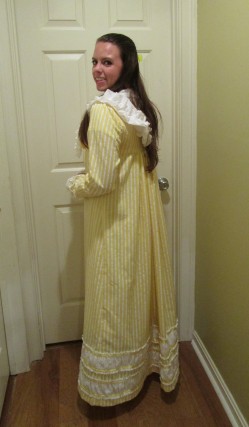 And now it’s my turn! I’m finally starting on a new day dress for myself with some block printed grey fabric that I’ve had in my stash for a year. About time!